Dr Kishonna L. Gray is Assistant Professor in Communication and Gender and Women’s Studies at University of Illinois in Chicago, and Faculty Associate of Berkman-Klein Center for Internet and Society at Harvard University. She is the author of Race, Gender, and Deviance in Xbox Live (Gray, 2014) and the co-editor of two books on gaming and culture Feminism in Play (Gray, Vorhees and Vossen, 2018) and Woke Gaming (Gray and Leonard, 2018) which looks at the potential of video games for instigating social change and justice. As well as publishing in academic journals, she also has an active blog and a podcast.

In this interview WPCC asks Dr Gray to consider the viral aspects to the spread of intersectionality discourse and whether commercial social media platforms have been, in the end, hospitable to ‘voice to anti-racist, anti-misogynist narratives?’ Opportunities within viral digital culture for users of colour and women, the characteristics of digital feminism, #BlackLivesMatter, Black Cyberfeminism and digital inequality are other topics covered.

Westminster Papers in Communication and Culture:

In thinking about virality, we are often exploring how fast something spreads and how far. ‘Intersectionality went viral’ pretty quickly after the inauguration of President Trump and subsequent Women’s march (21 January 2017). There was increased public attention on this concept of intersectionality.

However, the engagement with intersectionality wasn’t the way that scholars such as Professor Kimberlé Crenshaw3 intended. This tweet provides an example of what I mean:

When we centre marginalised people and experiences, those with more privilege assume they are being attacked. So folks don’t even know what intersectionality actually means. They (privileged bodies) just assume that it’s not about them and attack.

Most of our institutions have failed to address the distinct forms of oppression often faced by women of colour, differently abled women, poor women, and other marginalised women. Even more disturbing is White women’s continued investment in White supremacy (thinking about the women who vote for these oppressive regimes).

Social media has proven to be an innovative arena to express individual and collective examples of misogynoir,4 and these hashtags are examples of that: #SayHerName, #FastTailedGirls, #NotYourAsianSidekick, #NotYourMami, #SolidarityIsForWhiteWomen, and #MMIW (missing and murdered Indigenous Women). These hashtags embody the physical and digital experiences and realities of women of colour. They have employed digital technologies to raise awareness and shows the levels of continued resistance and empowerment employing an intersectional approach. But because women of colour are focusing on their own realities and experiences, many men and men of colour are lashing out and resisting. I think this viral quote summarises their sentiment: ‘when you’re accustomed to privilege, equality feels like oppression.’ 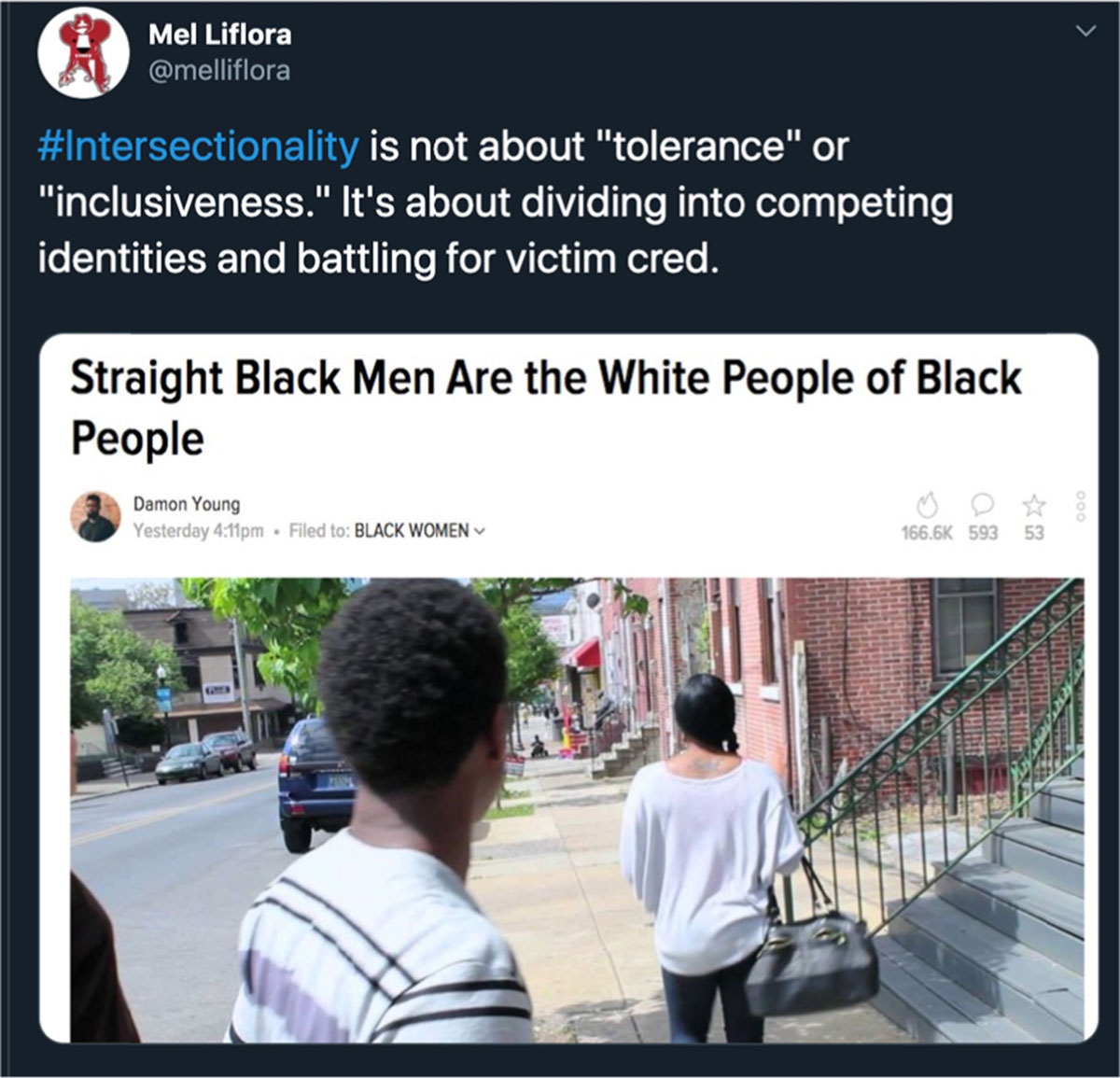 There are many social implications of the digital environment of rapid sharing – toxic messages tend to spread like a wildfire due to being emotive and arousing. What is your view on the suitability of commercial social networks for giving voice to anti-racist, anti-misogynist narratives?

I think the digital structure has revealed itself as not being a friendly space for anti-racist and anti-misogynist narratives. It’s almost like the internet was built specifically for the most toxic of cultures and environments. I think about these influencers who espouse white masculine supremacy on their platforms. People have worked hard to get these digital institutions to respond adequately to concerns about this content being readily available and accessible (the YouTube situation around children’s content is one such example). This content get clicks, and hits, and is popular. Even when social media influencers engage in racist practices their platforms explode in popularity (PewDiePie is an example).

We have been so desensitised that the most extreme provocateurs can become mainstream. Commercial social networks are not going to disrupt their perceived base to address racism and misogyny. This is why these platforms are so slow to respond (Twitch5) if they respond at all in meaningful ways (Facebook).

What opportunities or risks does the viral digital culture bring for users of colour and women?

For those who have access, these platforms have allowed individuals to create spaces that traditional platforms didn’t or wouldn’t allow. I think about Twitch, Mixer,6 and other streaming platforms, for example. These spaces provide opportunities to create and share content, generate revenue often, and even become influencers with politics, fashion, beauty, etc. Crowdfunding options are also opportunities for many folks to raise money for causes that have mostly been left isolated and hidden and also provide some basic necessities for folks needing medical support.

But there are risks associated with this as well. The publicness of their platforms raises their visibility in ways that often renders marginalised folks such as women and people of colour vulnerable to attacks, harassment, racism, sexism, transphobia, homophobia, ableism among other things. Especially related to call-out culture7 which many women of colour are often blamed for: we are mad at them for calling out a problem instead of being mad at the problem itself. Think [of] #MeToo8 for a number of examples.

Many of your publications explore the complicated relationship between video games and race and gender. In the imaginative space of Xbox, one is expected to have more freedom in shaping their identity. Yet, what patterns do users mostly follow?

It’s interesting that you frame Xbox as an ‘imaginative space’. I too once thought that these gaming publics could be spaces where anything and everything was possible. But what we immediately saw was the manifestation of racism and sexism. I wrote that in online environments, users have the opportunity to be invisible as they move in and out of web sites, message boards, and sometimes chat rooms.

While this invisibility provides a level of protection for some users, it also gives some other users the courage to say and do things they may not normally do – such as engage in racism and sexism. Of course the anonymity isn’t creating the toxicity – as we know in the era of Trump and these other pro-white supremacist leaders we have in our countries now, folks are publicly engaging in practices once considered morally outrageous.

Many scholars on race and gender, including Professor Lisa Nakamura,9 suggest that fan and slash cultures are enabling better gender equality in participation. Can you see any progress in video games and streaming?

There are many progressive changes in these spaces but the changes don’t immediately result in progressive change for the most vulnerable users. For instance, Microsoft Xbox once implemented a system where certain gamers would engage with one another (Gamer Zones) or interact with gamers who match their playing style (casual, pro/hardcore, family, etc.).

This was supposed to reduce the abuse experienced in the game – just isolate the worst offenders with each other. I don’t think they realised how pervasive the issue was in practice; these gamer zones didn’t mean much as they didn’t affect game play or the matching of players online.

Xbox also implemented a zero tolerance policy related to racist speech. So there is a zero tolerance for the ‘n-word.’ However, they didn’t account for the ways that many Black and African-American players would utilise this word in their everyday speech practices with each other so they have been the ones most disparately impacted. I was even suspended for using the ‘n-word’ when I asked a white sounding player why he called me nigger in the game. He didn’t respond so I texted it to him and was immediately banned. They eventually fixed it but it just shows that their progressive changes aren’t panning out in the ways they intend.

You have argued that virtual feminism is distinctive from previous, print-, action-based and offline feminism. Can you describe the traits of digital feminism that you find distinctive?

So #BlackLivesMatter is an example of Black cyberfeminism. Call-out and cancel culture11 are distinct examples of Black cyberfeminism. What makes them distinct is because black women who organise and mobilise using digital technologies are using their platforms to address some kind of disparity that has been exacerbated by structural inequalities. These include institutions protecting toxic masculinity (Kavanaugh12), police brutality and overuse of power, black women’s exploited labour, black hair politics and cultural appropriation. Black women have always utilised mediated platforms to express these concerns. So what makes them distinct is that they have a particular history and legacy form which they emerge from (Ida B Wells13 and her journalistic traditions, Sojourner Truth14 and her visual platform, Anna Julia Cooper,15 and others).

Black women’s digital praxis is directly informed by the radical tradition of Professor Anna Julia Cooper, Sojourner Truth, and other women through their visual, textual, and oral narratives. Anna Cooper specifically develops a unique understanding of social justice that is exponentially more valid for Black women than anyone else due to the dual forms of exclusion and oppression Black women routinely encounter.

#BlackLivesMatter, which started as a viral phenomenon, mobilised many people in various parts of the US and abroad for digital and offline action. Can we see this example as a positive, forward-looking way to exploit the power of virality?

I wish this were true. Right after the death of Mike Brown, I, like many other concerned citizens who wanted to support the protesters and community of Ferguson, travelled there and engaged in a public interest research project. Many citizens and protesters who utilised social media were extremely excited about the possibilities to effect change. They realised that those platforms give them the opportunity to share their own stories and control their own content – a tenet of Black Cyberfeminism as I argue above. However, they soon realised that ‘social media won’t save them’ as their arguments and platforms were subject to intense misinformation campaigns and the US soon saw them as a dangerous group – likening them to terrorists. So yes they went viral but this has not led to the changes they imagined.

What are the areas of digital inequality we should be paying close attention to in the next decade?

I still think accessibility is the area of concern as we continue to explore digital inequalities. We see the pervasive use of digital technologies and dissemination of mobile technologies that may suggest a level of equality. But I look more at equity in access and use – are folks utilizing these technologies in ways that can improve their social conditions. And if not, why not?

I think we have a false sense of what change looks like. So just having access won’t transform your life. The way that the Civil Rights Act (1964) provided access to public spaces – but did this improve the lives of Black folks in the US? When we look at the numbers (economic mobility, reduction of poverty, improvement of wage gap, access to housing, educational outcomes), no, not really. Our institutions have not changed to become more equitable. So levels of structural inequalities are actually worsening if you ask me. I had to help a person recently released from incarceration fill out a job application online because they didn’t know how to use a computer. This is just not OK. Basic needs are still not being met.

I also mean accessibility in terms of who can take part. Learning the narratives and stories of differently abled people has highlighted how much they are left out of. And with growing numbers of our populace who identify as disabled, this is a huge concern when we think about who is controlling and dominating the conversations. Privileged bodies are still dictating the narrative.

The authors have no competing interests to declare.

This article has no summary